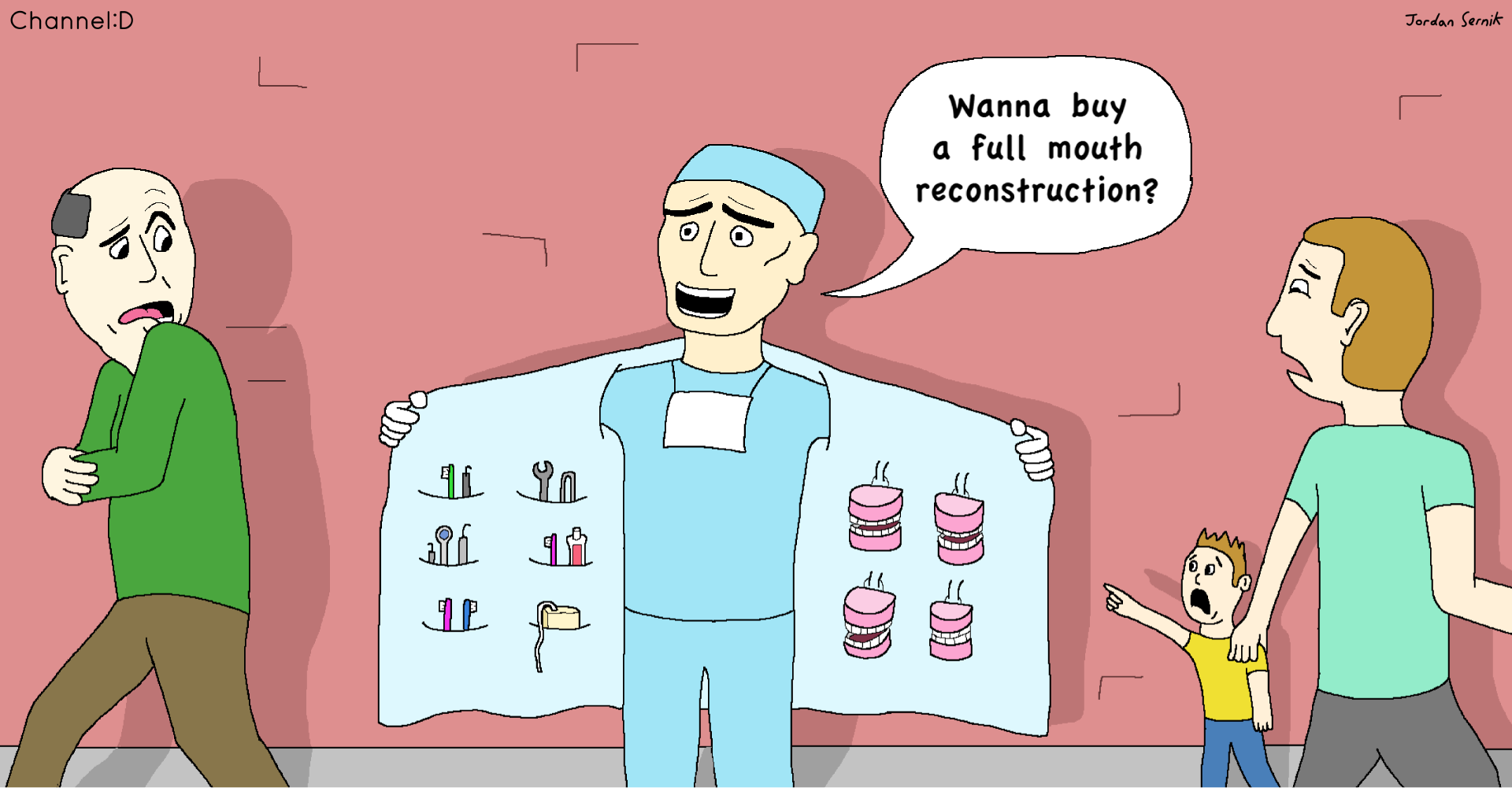 Dentist: So, what can I do for you today?

Patient: I’ve got a broken tooth.

Now the dentist takes a look, takes an X-ray and says:

“It looks like this tooth needs a filling or a crown.” Occasionally the patient will say, “Fine, just tell me the best thing to do, and I’ll do it!” On the surface that seems like the ideal response, but let’s see how that answer can cause problems.

Patient: How much is the crown?

Patient: I’ll need to think about it.

The logical thing to do now would be to defend your decision, and try to convince the patient they need a crown. And in doing that it’s easy to come across as being pushy, and trying to ‘sell’ procedure. And guess what? You've snookered yourself.

The number one complaint on review sites like Yelp is “The dentist tried to sell me treatment that I didn’t need!” Getting criticized on these sites can crush your business (game over). A lot of ethical clinicians are getting smeared because a patient misinterpreted a well-intentioned recommendation as “sales pressure”. So, once you hear “I need to think about it”, you should probably take the hint and don’t push your luck (or your agenda). When you’d digging yourself a hole, the smart thing to do is stop digging.

How Should it be Done?

If the patient had been handled differently, there might have been a better outcome. It’s important to remember this important fact. The treatment decision a patient makes is dependent on their level of concern. Get that idea clearly in your head because it’s critical.

The earlier you know their level of concern the better. That’s because it gives you clues as to what sorts of things you need to say.

Here’s a suggested method, with a greater chance the patient will choose optimal care. You need to use your own words to make this strategy work.

Step 1. Before you make recommendations, determine their level of concern.

“Before I take a look at the tooth, can you tell me what happened?”

This open question may give you some clues as to the patient’s concern.

If you still don’t know, ask a polarized question. This is a question with two extreme positions.

“I find that patients tend to fall into one of two categories. For instance, one person with a broken tooth might say... I don’t care much about my teeth. If it’s broken, I just want whatever is quick and cheap…and another person with the same condition could say…my teeth are very important to me. I really want to keep my teeth. I’m interested which category you’d put yourself in.”

If it's said exactly like that, most people will choose one category over another.

Occasionally patients will say…”I’ll just leave it up to you Doc.”

If they say that, go to the next step.

Step 2. Lay the patient down. Have a look around. Don’t do any charting yet. Take a photo of the tooth.

Step 3. Sit the patient up. Load the photo onto your computer monitor and position the monitor so the patient can see the photo.

Step 4. Say to the patient, “Excuse me for a moment while we write some notes onto our records”. Now ask the DA to take notes as you describe in simple language what you see. You are talking to the DA, not the patient. Since the patient is a passive observer, they’ll be better able to understand and absorb what’s happening.

For example, you could say to the DA:

“Betty, please note for the record that the lower 1st molar has an amalgam filling that covers about 80% of the tooth. There is a crack running down the outside of the tooth that is 5 mm long. Half of the inside portion of the tooth has broken off. The tooth is now too weak to fill because the rest of the tooth could now break under the gum and that would make the tooth terminal. We’ll take an x-ray and see if anything else shows up.”

This is all said clearly in simple language. The purpose is to have the patient see the problem and hear the description of the problem.

Don’t speak to the patient. You are speaking to the DA. The whole purpose is to have the patient overhear and understand what’s happening. Only describe what is clearly, irrefutably visible.

Step 5. Lay the patient back down again if necessary and complete the charting. Try to do this efficiently. This gives the patient time to absorb what’s going on.

Since you’ve described both the problem and also described the consequence of the problem, the patient still doesn’t know what the treatment solution is. This usually makes them curious. Typically, they’ll be asking you what can be done.

Step 6. Sit the patient up. Draw their attention to the photo of their tooth and say:

“I’m curious what you see when you look at this picture of your tooth?”

Most patients will describe their problem accurately because they overheard and saw you describe everything a few moments ago.

If they don’t know what to say, just point to the tooth and say “So when you look at this bit here, how would you describe what you see?”

The advantage of this method so far is that we have sequenced the problem and its consequences before offering any solutions. When the patient describes their problem, you can be 100% certain they believe the problem exists. The act of them describing their own problem is infinitely more effective than you describing it, and asking them if they understand.

So, don’t jump into making recommendations prematurely. Before discussing solutions, the patient needs to be completely convinced that a problem exists. The best way to be sure that they really believe the scale of the problem, is for them to describe the problem in their own words. People believe what they say, not what they hear. If you can get the patient to tell you what’s happening, that’s when they’re really ready to discuss solutions; but not a moment before.